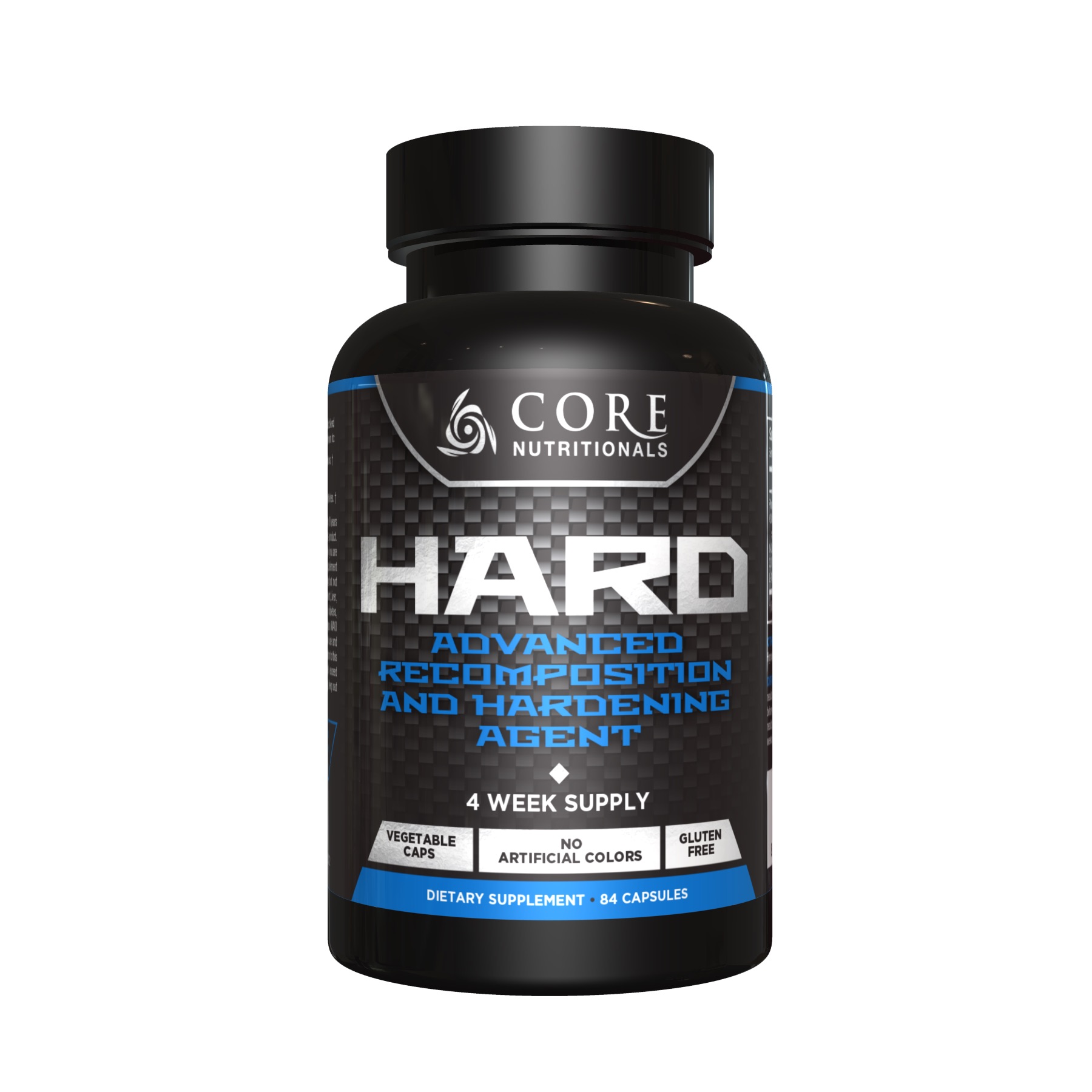 Your diet is impeccable and couldn’t be any more in check – macros, micros, you have it all down. Your workouts? Get out of here! You have slaved, grinded, and grunted your way through leg workouts so intense the gym staff cried – and those were on your worst days. And yet, something is missing.

It’s that “extra” level of shred, “that look.” You know exactly what we mean. That type of leanness and density that makes an arm look twice as big, a stomach look twice as lean, and a forearm look like a roadmap for the Italian countryside. It’s that kind of elusive hardness that’s so rare, most of us simply chalk it up to genetics, or luck, or steroids, or whatever excuse we have handy – and yet we all still want it.

The reality? It isn’t all that unattainable. Getting “that” look, “that” hardness, is about balance and recomposition. It’s a matter of adding in that final piece of the puzzle that makes the entire picture come out perfectly.

To be hard, you need to get HARD. It’s that simple.

Core HARD is another product in the Core Nutritionals’ lineup to follow the basic, but indispensable principles that Core Nutritionals is slowly making an industry standard: create products with effective ingredients, in effective doses, in a non-proprietary formula. This time around, we have applied those principles to the problem of softness that we all despise and have developed the most advanced ultra-hardening and recomposition agent on the market.

Taking advantage of both the old and the new, Core Nutritionals has employed both modern, cutting-edge compounds and traditional herbs to create a balanced approach to delivering hardness. Key ingredients in Core HARD affect some of the body’s critical physiological pathways, combining sexiness and science in a single, non-proprietary formula. We have included five powerful ingredients into a full month's worth of stimulant free, recomposition goodness.

Phosphatidylserine, colloquially known as PS, is a nearly ubiquitous phospholipid found in various membranous tissues throughout the body. PS’s ubiquity coincides with its necessity for crucial physiological functions, as the phospholipid is implicated in several components of cell communication, as well as the mediation of catecholamine synthesis and transmission in the brain (along with other neuroendocrine functions). In a fitness-related context, a nascent but growing body of methodologically-sound research suggests that PS may play a role in increasing exercise capacity.

Studies administering the compound in both acute and chronic fashion suggest that PS has a measurable effect on exercise capacity. In a double-blind, placebo-controlled, randomized trial involving 16 trained athletes, phosphatidylserine was administered for 10 days prior to an acute exercise challenge. Exercise markers such as exercise time to exhaustion, sprint performance, and ratings of perceived exertion, were measured post-exercise. The authors found that exercise time to exhaustion was significantly altered. Related studies using similar serving sizes have found that chronic PS administration increased shot accuracy in golfers, increased exercise time to exhaustion by 28% in cyclists, and reduced subjective feelings of stress and soreness in others.

Overall, phosphatidylserine appears to play a valuable role in the increase in exercise capacity. PS may therefore play a critical role in the continued exercise success of bodybuilders in a, “cutting” or recomposition stage.

Withania somnifera Dunal, colloquially known as Winter Cherry or Indian Ginseng, is an herb that features prominently in the traditional Indian medicinal system of Ayurveda. Known as Ashwagandha in Ayurveda, Withania somnifera is a critical ingredient in various Ayurvedic tonics and tinctures prepared as a traditional remedy for the treatment of various ailments.

Recently identified as a potent adaptogenic and target for therapeutic applications, Ashwaghanda has been the subject of numerous animal, pre-clinical, and clinical trials designed to examine its potential effects as an antioxidant, anti-carcinogenic, anxiolytic, antibacterial, antifungal, and immonumodulating compound. Ashwaghanda’s broad therapeutic potential is hypothesized to be the result of its robust phytochemical profile, including a wide swath of alkaloids, sitoindosides, and the highly biologically active withanolide group. As the principally biologically active compounds within Ashwaghanda, withanolides such as withanone, withaferine A, withanolides A, D, and G have been identified, isolated, and extensively studied in the various applications noted above.

In recognition of the potential physiological benefits of withanolides, Core Nutritionals selected KSM-66® to include in its HARD formula. KSM-66® is a full-spectrum Ashwaghanda extract, standardized for 5% withanolides – meaning that KSM-66® not only includes the full range of biologically active compounds within Ashwaghanda, but also that it contains the highest currently available concentration of the principally active withanolides (5%).

The high concentrations of withanolides within KSM-66® has resulted in encouraging results in a number of human, clinical trials – particularly considering many of these trials were conducted using the methodological gold standard of randomization, double-blind delivery, and placebo control. Amongst the most impressive results contained in these trials:

Though each of these results is impressive, perhaps the most significant is the 27.9% reduction in cortisol seen in the 60 day trial. As detailed above, cortisol possesses a multitude of potentially degradative physiological effects, including: inhibiting glucose uptake, causing a constriction of the vasculature (vasoconstriction), the breakdown of glycogen, and inarguably the result most would desire to avoid, proteolysis (the breakdown of muscle tissue).

To put it the simplest way possible, cortisol’s chief functions involve either turning on, or shutting off, the very things we as fitness enthusiasts want to avoid or turn on, respectively!

N-Coumaroyldopamine is a natural analogue to the phytochemical N-Caffeoyldopamine, itself found prominently in various plants, including cocoa (Theobroma cacao L.). N-Coumaroyldopamine, its parent compounds, and other analogs that derive from its parent compound, have recently been the subject of phytochemical analyses due to their chemical similarity to sympathomimetic amines known to couple to the beta-2-adrenergic receptor.

Just within the context of beta-2-adrenergic agonism, this amounts to cAMP increasing resting metabolic rate and caloric expenditure (the amount of calories you burn), improving peripheral sensitivity to glucose and glucose utilization, reduction of gluconeogenesis, induction of AMPk (adenosine monophosphate kinase) release, triggering of lipolysis (the literal burning of fat tissue we spoke about earlier), the inhibition of lipogenesis (the creation of fat tissue), and vasodilation.

To say that cAMP is a desirable compound to increase the release of – which activating the beta-2-adrenergic receptor does – would qualify as the understatement of the year!

What we typically refer to as “Estrogen,” is in fact a group of three biologically distinct hormones – estradiol (E2), estrone (E1), and estriol (E3), each possessing different activities in different cell, tissue, and receptor types. When experts refer to either the benefits or downfalls of “estrogen," they really mean to (but probably cannot) identify a specific estrogen.

In recent years, so-called “phytonutrients” have become the focus of clinical research, as these natural compounds have shown the ability to increase the ratio of good, estrogen decreasing estrogens (such as 2-OHE), to bad, estrogen increasing estrogens (such as 16-OHE1). One of these phytonutrients, a dietary indole known as indole-3-carbinol (I3C), is the bioactive phytochemical and a presumed modulator of reduced cancer risk in areas with high cruciferous vegetable consumption. Unfortunately, despite its potent antiestrogenic activity, I3C is highly molecularly unstable, and therefore unsuitable for use as a therapeutic agent or dietary supplement.

Luckily, however, I3C readily metabolizes into the secondary indole 3,3’ diindolylmethane, or DIM for short. When used in a supplemental fashion in clinical trials, DIM appears to possess all the positive effects of its parent compound with respect to antiestrogenic action – promoting the metabolism of beneficial estrogens that themselves reduce estrogenic activity.

Aside from its healthy-estrogen promoting abilities, DIM also exerts its own direct physiological effects, including:

Despite the bodybuilding community’s single-minded crusade to eliminate estrogen wherever it lie in wait, compounds such as DIM show us that estrogen is a very diverse set of compounds – and that we should actively pursue increasing certain estrogens that have beneficial, and ironically, anti-estrogenic effects.

Though the literature surrounding L-theanine is still emerging, the amino acid is slowly building a reputation as one of the most interesting and exciting compounds being targeted for therapeutic use. L-theanine is an amino acid found almost exclusively in tea, constituting approximately 1-2% of the dry weight of tea – resulting in a 25–60 mg theanine load per 200 ml serving of liquid tea.

First identified in green tea and in the mushroom Xerocomus badius, L-theanine readily crosses the blood-brain barrier in a dose-dependent manner, and it is thought to inﬂuence the central nervous system (CNS) through a variety of mechanisms, including:

In addition to these more well-demonstrated effects, emerging electroencephalography trials on theanine suggest that the amino acid may exert a positive effect on alpha waves – a type of brain wave implicated in restful relaxation. Alpha activity has also been associated with increased creativity, increased performance under stress, and improved learning and concentration, as well as decreased anxiety.