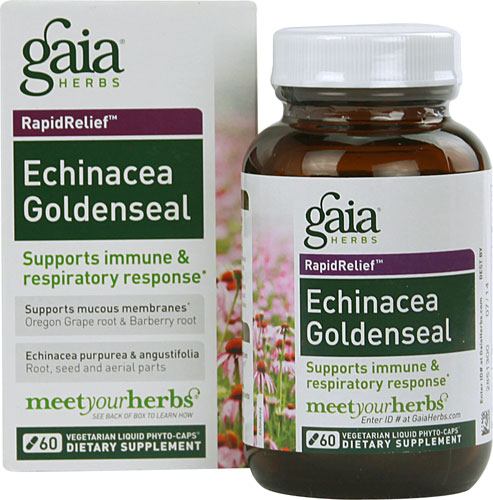 This formula supports the immune system during times of stress. Echinacea/Goldenseal Supreme is particularly useful where support for respiratory health is indicated. As you can see from the traditional use of this compound's ingredients (described below), it has been formulated to be broad acting in such situations.*

It has been said that Native Americans used Echinacea to treat more conditions than any other remedy. The Eclectic medical doctors, from the first half of the last century, also praised Echinacea for its benefits to the respiratory tract. Today, modern science is beginning to support much of its established traditional use, by showing that extracts of Echinacea spp. have the ability to strengthen immune function. Research has further shown that alcohol/water extracts of Echinacea significantly enhance natural killer cell function, and have phagocytic and metabolic influence on macrophages. This simply means that Echinacea has the potential to nonspecifically activate your immune system. In other words, it helps your body respond when needed. Almost any alterative formula that focuses on enhancing the immune system could well benefit from this powerful botanical.*

Goldenseal rhizome and root is native to North America. It has traditionally been used to soothe the mucous membranes. Like several other ingredients of this formula (i.e., Oregon Grape root and Barberry root), Goldenseal contains the immunostimulatory alkaloid, Berberine. Oregon Grape root has a history of traditional use closely resembling that of Goldenseal. Oregon Grape has distinguished itself, however, by its effect with simple acne.*

Barberry root is a bitter tonic that pharmacologically shares many properties with Goldenseal and Oregon grape root. And, as one may expect of plants with closely related chemistry, the traditional use of Barberry is also similar to other Berberine containing plants.*

St. John's Wort flower buds have been used traditionally for more than 2,000 years. It is utilized here for its harmonizing effect with anxiety and nervous system health.*

Note: The intention of this information is to represent the traditional use of the individual botanicals found in these formulas and to inform the reader of any evolving scientific inquiry relevant to the formula's ingredients.

Duration of Use
A maximum of 5 days.

Note: Although there are conflicting beliefs surrounding the negative impact of using berberine-containing plants, it is suggested that you follow the use of this formula with probiotic treatment (L. acidophilus, L. bifidus, etc.). If Crohn's disease is present, please consult a licensed health-care professional before commencing probiotic use.

Best Taken
Between meals, with a small amount of warm water

Known Drug Interactions
Consult a physician if you are using any pharmaceutical drugs.*


*These statements have not been evaluated by the Food and Drug Administration. This product is not intended to diagnose, treat, cure, or prevent any disease.