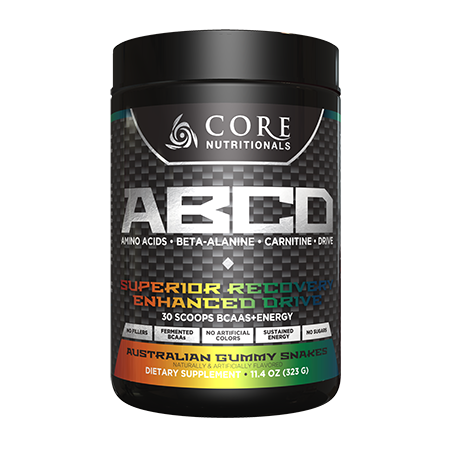 Amino acid products with a caffeine or energy component are very popular these days. There’s only one problem: almost none of them contain a solid serving of amino acids, and most don’t contain BCAAs at all! Don’t get us wrong, we love EAAs – but when you think “amino acid product,” are you really thinking cysteine? Us neither.

So, in classic Core style, we did something about it: we created Core ABCD, the amino and caffeine product with actual BCAAs, at a full serving size. But we of course didn’t stop there. We included CarnoSyn® beta-alanine, to provide you muscle energy and endurance – along with the caffeine in our Drive™ energy blend. We included N-Acetyl-Tyrosine for all its important roles in metabolism and neurohormone production. We included Acetyl-L-Carnitine, to keep that carbohydrate and fat metabolism rolling. And of course, we included not only caffeine (which all the other guys do), but also choline bitartrate – to enhance focus along the way.

Core ABCD is the premiere and most complete product in its category, hands down. No product of its type offers as much for such little cost: it’s an energy product, an endurance product, and a complete amino acid product all in one.

If one were to think of the body as a construction project, amino acids would be the most basic building materials: raw lumber, mortar, bricks, and so on. While the assembly of these building blocks is of course critically important to the function of the building – and one of the amino acids, leucine, controls its own assembly – the quality and availability of the materials themselves is arguably more important. Not enough concrete? The foundation cracks and the building falls.

Your body is the exact same way. It is comprised of various amino acids, both essential and non-essential, that comprise the cellular basis of each and every cell in your body. When it comes down to skeletal muscle, the three most important are known as the BCAAs – or branch chained amino acids. Comprised of leucine, isoleucine, and valine, these three little amino acids effectively control the rate at which your muscle grows (hypertrophies), its contractile force, its endurance, and so on – to say they are massively important is an understatement. For this reason, they form the basis of any competently-designed supplement protocol.

Leucine’s insulin-mediated effects are largely the result of its activation of the classical insulin receptor substrate (IRS)/phosphatidylinositol (PI) 3-kinase (PI3K)/Akt/mTOR signal transduction pathway. In this pathway, the bonding of a substrate (glucose) eventually activates a compound known as Akt. Once phosphorylated and activated, Akt signals the release of the famous mammalian target of rapmycin (mTOR). mTOR then increases the translation of muscle-cell ribosomal proteins that increase ribosome biogenesis, which is the literal production of proteins. Leucine has additionally been shown to positively regulate protein synthesis independent of insulin. In certain trials where rapamycin and leucine were co-administered, rapamycin showed only partial inhibition of leucine’s effects on muscle protein synthesis.

In more practical terms, there is a significant body of evidence demonstrating the positive effect of BCAA’s on athletic performance. Extensive studies in exercise-trained populations reveal that, collectively, BCAA’s may:

While products with larger BCAA ratios (ratio of leucine, to isoleucine, to valine) have recently flooded the market, Core Nutritionals has remained with the gold standard of 2:1:1. This decision is made in recognition of the fact that, for all its potential benefits, there is no evidence demonstrating a realized effect of a larger BCAA ratio – and in fact, all the benefits mentioned above derive from evidence using the gold standard 2:1:1 ratio.

Carnosine is a bit of an odd duck: we know that it is crucial for muscle function, and that dietary sources of carnosine are essential, but we don’t know precisely how its working. Moreover, for decades, we had no idea how to increase intramuscular concentrations, as exogenous carnosine sources degraded in the body so fast as to be effectively useless.

Enter beta-alanine. Simply a different iteration of one of the amino acids that comprises carnosine itself (alanine), beta-alanine has proven to be the most effective means of significantly increasing intramuscular concentrations of carnosine – and therefore of promoting all of carnosine’s various beneficial effects on muscle performance. If that weren’t enough, beta-alanine has also demonstrated beneficial physiological effects independent of its parent compound. In order to understand why, though, we need to first understand some of the basic behind carnosine itself.

Carnosine, a cytoplasmic dipeptide synthesized from the precursors L-histidine and l-alanine, is present in high concentrations in skeletal muscle and plays a pivotal role as a, “chemical buffer” in myocytes (muscle cells). It has long been known that carnosine concentrations are highest in glycolytic, rather than oxidative muscle fibers (roughly speaking, explosive vs., endurance muscle fibers, respectively), and thus long hypothesized that this amino acid is required for sustained performance during supramaximal exercise. Recent research demonstrates that carnosine exerts its physiological effects in long hypoxic (low oxygen) drives by functioning as a high-capacity pH buffer in skeletal muscle, preventing the pH ratio of plasma from dropping too low – and therefore preventing crucial pH-dependent processes such as protein synthesis from being inhibited by acidosis.

In simpler language, this essentially means that beta-alanine is a dietary supplement that promotes its own effects in combination with exercise. As you exercise, you simultaneously intensify beta-alanine’s physiological actions – both directly, as well as in the production of intramuscular carnosine. Once ingested, beta-alanine’s exercise-specific beneficial activity is well-established. Elevation of intramuscular caronsine content via beta-alanine supplementation has been show to improve performance in the following ways:

These myriad benefits make beta-alanine both one of the most-studied, and most well-rounded dietary supplements. Beta-alanine not only has direct, actionable physiological effects, but also promotes critical muscle physiologic adaptations that promote its own effects.

Acetyl-L-Carnitine (ALCAR) is a little bit like your 401K: you need it, you know you should pay attention to it, but it’s not exactly the sexiest topic. We know; we feel you! But we also know that ALCAR is one of the most fascinating, useful, and physiologically exciting workout supplements on the planet. You’re hard-pressed to find a single other ingredient that is involved in so many critical bodily processes: fatty acid and carbohydrate metabolism, neurotransmission, exercise performance and capacity, brain function – the list goes on! So, like your 401K contribution, don’t forget to pay into your ALCAR fund.

Unfortunately, due to excess metabolism of l-carnitine by microorganisms in the small intestine, exogenous supplementation with oral l-carnitine has proved ineffective. ALCAR, an acetylated version of l-carnitine, has considerably higher oral bioavailability, due likely to only partial hydrolytic metabolism. Once in the bloodstream, ALCAR plays a fundamental role in the production of energy, acting as the catalyst for the beta-oxidation of long chain fatty acids by the mitochondria; regulating the CoA to Acyl-CoA ratio (necessary for the production of ATP); and the metabolism of carbohydrates. ALCAR also is an excitatory agent for neurons, increases neuronal transmission, and increases the production of neurotransmitters and neurohormones such as dopamine and serotonin.

Tyrosine is amongst a class of amino acids known as ‘non-essential’amino acids, so called because the body can produce them endogenously, and it is therefore not essential to consume dietary tyrosine. That said, tyrosine is also what is known as a conditionally-essential amino acid; conditionally-essential because, along with glucose and ammonia, the synthesis of tyrosine additionally requires adequate levels of phenylalanine. Once synthesized, tyrosine is one of the most critical amino acids, given its prominent role as a substrate in the synthesis of the catecholamines dopamine, norepinephrine, and epinephrine, in addition to both T3 (triiodothyronine) and T4 (thyroxine) thyroid hormones.

In studies on stress modulation, tyrosine has been demonstrated to reverse stress-induced norepinephrine depletion and the depressant-behavioral effects normally associated with it. In simpler terms, tyrosine may, in certain conditions, dampen the extent to which norepinephrine is removed from the bloodstream during a stress event. In simpler terms still, tyrosine may help to mitigate the sense of depletion and fatigue felt at the end of a workout.

Tyrosine may also play important metabolic functions, mostly related to its role in synthesizing compounds which stimulate the nervous system. While not traditionally considered a sympathomimetic amine, studies which have coadministered tyrosine and stimulants demonstrate a synergistic effect. These studies suggest that tyrosine may potentiate the effects of both endogenous and supplemental norepinephrine and its mimetics (in the case of exogenous use) with respect to lipolysis, thermogenesis, and energy expenditure. Meaning that tyrosine may play a role in assisting norepinephrine to break up triglycerides and increase body heat transiently.

Choline is an essential nutrient involved in numerous metabolic pathways, including DNA regulation and repair, protein function, and metabolism. Perhaps most importantly, the critical neurotransmitter acetylcholine is produced directly from free choline via cholinergic neurons. Acetylcholine is then responsible for a number of functions itself, most crucially as the compound which induces muscular contraction, and as the neuromodulator partially responsible for modulating risk/reward, arousal, and enhancing memory.

Choline’s essential role as a substrate for acetylcholine, and therefore brain development, is well documented in animal models. These studies demonstrate that levels of free maternal choline have a direct and fundamental impact on prenatal brain development, with the enhancements or deficits lasting into adulthood. Choline’s enhancing effect is particularly prominent in the hippocampus. In humans, the hippocampus is primarily involved in the consolidation of memory (taking short, episodic memory and translating it into long-term memory) and the learning of new information. Acetylcholine is a critical component in these processes, as mentioned above, and choline may therefore play a potential role in these processes as well by providing the substrate for acetylcholine synthesis.

Tartaric acid occurs naturally in the food source, while its salt derivatives (tartrate, for example) have been used as acidulants, antioxidant synergists, buffers and sequestrants. As free base choline is rapidly destroyed in metabolism, attaching a salt to enhance absorption is necessary. The bitartrate salt addition preserves choline from being destroyed during metabolism.

Caffeine is one of the most widely consumed, and perhaps some of the most reviewed, psychoactive compounds. Their physiological effects in a range of areas have been well-documented, including exercise performance, information processing, alertness and mood enhancement, attention, and awareness, along with its anti-lipogenic and lipolytic abilities.

Most importantly to Core ABCD, caffeine has been shown to have significant effects on exercise performance, even with ingestion in servings as small 3 to 9mg/kg/bw/day (the equivalent of 2 cups of standard coffee, for a 170lb male). In endurance training, possible explanations for caffeine’s performance-enhancing effects lie in its metabolic effects on both lean and fat tissue. It is suggested that caffeine’s potent lipolytic (the breakdown of fat tissue into fatty acids) and oxidative (the actual ‘burning’ of fat) action allow the body to utilize these sources during prolonged submaximal exercise. As a consequence, muscle glycogen is spared and available for use later in the training session. Practically speaking, this means caffeine is forcing your body to preferentially use fat tissue as a fuel source, while sparing the glycogen which gives you the full-bodied look!

In short-term exercise, caffeine’s demonstrated role in the inhibition of cyclic AMP- phosphodiesterases (PDE), adenosine receptor antagonism, and adrenoreceptor agonism come into play. These three pathways collectively stimulate lipolytic activity, boost fat metabolism, increase metabolic rate and energy expenditure, and regulate the body’s thermogenic activity. The practical results of activating these pathways are increases to the contractile force of both cardiac and skeletal muscle (harder flexion), an increase in energy expenditure (freeing up more caloric energy to be used in contraction), dilation of vasculature (better blood flow), and improvements to both nitrogen retention and skeletal muscle protein synthesis (key components to muscle building).